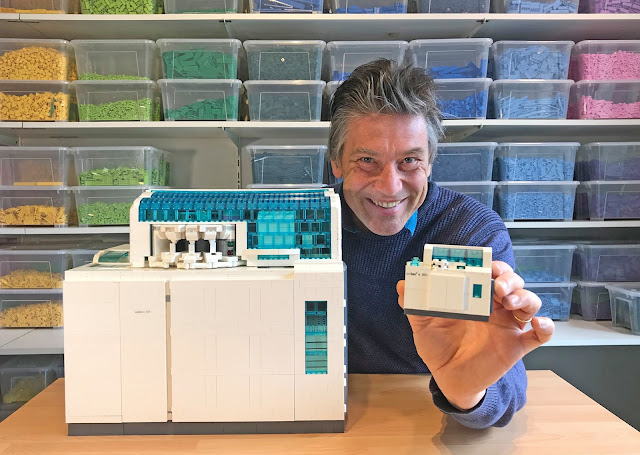 Unfortunately, we had to say goodbye to Andreas and Arno. I guess with them, the most
witty moments will disappear from the program. Those two just had the hang of coming up
with the right jokes at the right time.

They had also been assigned the most difficult object. The convex shape of an old toaster is
not only very difficult to build, it is also relatively unrecognizable. I disagreed with one
statement from the duo: “building a convex shape is more difficult the bigger the model gets”.
I think it’s the exact opposite, because our brain filters out the imperfections more easily (the
"straight blocks" versus the "convex shape") the bigger a model gets. By the way, that is partly why the heads I build are almost always 1.5 times the size of a real head.

Anyway, all of the above set aside, I also would have sent Andreas and Arno home this
episode. Not because they hadn't used minifigs - that's totally incidental to me. But simply
because the other creations were … better.

But first, something about the first assignment: making a mini or even micro version of the
object within ten minutes. LEGO creations hardly even surprise me, but this time… all teams
managed to create superb models in an inhumanly short time: hats off to all of you!

As for the big models, choosing a favorite was really difficult. Also for me Martijn and Jos on
the one hand, and Björn and Corneel on the other, were the best. Both objects looked like
perfect copies of the original, both objects captured the story nicely, and in both cases the
stories matched the function of the device.

The portrait of the Brickmaster made me laugh, so maybe I would have picked Björn and
Corneel as winners. That photo was not making things easier for them. I might have
confined myself to a black and white cartoon - which would have been a lot easier. And then
that lens… I had to play back the fragment three times before I understood how they had
done it. And then there was the working flash, amazing!

Anyway, Martijn and Jos won, and their radio was great. Beautiful on the outside, brilliant on
the inside. I also found the sewing machine of David and Giovanni and the mixer / blender of
Jan and Lola to be more than successful. With a slight preference for the sewing machine:
I liked the absurd twist of the working of the non-working. It may not have been obvious at first glance, but if you made the effort to actually look, it was really cool.


And on a different level …

I think it is wonderful that the candidates consult each other - and that they are allowed to
do that. Because that's also LEGO!


See you next week!

PS: The attached picture: These are two scale models of a medical diagnostic device that
Amazings made about six years ago for the product launch at Roche Diagnostics. And
honestly, we needed more than 10 minutes for the little one, and more than 10 hours for the
big one.