My favorite sculptures for the fourth episode of LEGO Masters 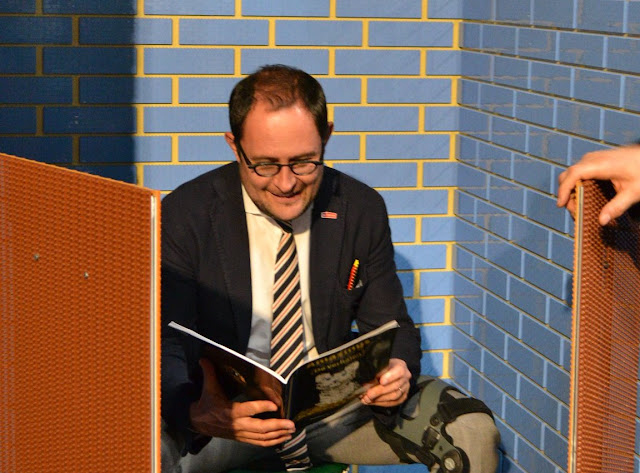 This episode, I had to witness the elimination of Eve and Natasja with a heavy heart. I will miss the banana-moments! Your microwave, which you built in the third episode, is engraved in my memory.

This was a difficult assignment: create a beautiful, coherent LEGO masterpiece with a pile of - what seems to me - random LEGO bricks.

Eve and Natasja circumvented this issue: they were clever enough to cover the surplus of bricks in a box.

This duo was my favorite during this episode. The idea of the witch with the gingerbread house, was, ad ever, very original and perfectly elaborated.

This is, for me, the second best duo of this episode. The island with adjusted car looked incredibly

Bjorn and Corneel's robot was a success. I generally don't like the the Japanese Goldorak-look, but this was impressive.

The second assignment was: set up three floors of an apartment, as if you were designing your dream house. This assignment was, in my opinion, misleading. Both David & Giovanni and Eve & Natasja elaborated this perfectly. However, they forgot to add something the Brickmaster had never seen, as an addition to the sculpture. Designing your dream house was a bit more complicated and more eccentric than these duo's expected.

With the eccentric detail in mind, the tree-with-fertilizer inspired me to add a picture of the mayor of Kortrijk on a life-size toilet to this column.

That's exactly how we at Amazings interpret "I want to feel like a mini-figure".

Bjorn en Corneel's concert, with the amazing 'elevator-for-the-band'. I like this stunning piece of creativity, mainly because of my background as a cabaretier/comic. However, I still would have picked a different winner.

Andreas en Arno, again, get the silver medal. The theme park was - again - a magnificent idea, and the building was flooded with detailed stories. the roller coaster undermined the esthetics in general, but still: very creative and original.

Jan and Lola: again my favorite duo of this episode. Their story was well thought-through. The outside as well as the inside were perfectly elaborated, the story was good, the sceneries were beautifully executed. It all made sense. I think that the camera could have shown a little more of this castle. This is my general opinion; the sculptures should be filmed longer.

Apart from the LEGO-aspect, I was surprised to see the bond when the group gave David a big group hug. That magic and spirit, which I missed during the first episodes, was clearly present. That's beautiful and for me, that's LEGO as well.

See you next week!
Dirk