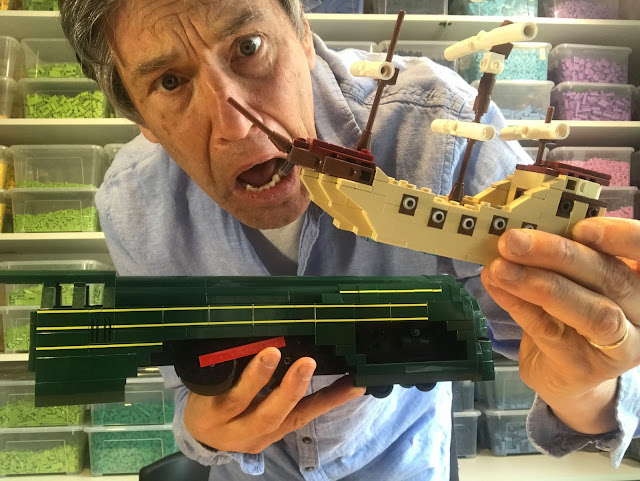 First of all, congratulations to Björn and Corneel: 160 kg on top of a 3m long LEGO bridge, and the thing still didn't collapse: fantastic.

The engineer in me would like to get a better look at how you managed to do that. It is a pity that they didn't emphasize this in the editing of the episode, possibly bringing in an expert in bridge construction, or at least rendering the bridges that broke down in slow motion... Anyway: Björn and Corneel, you are clearly a strong team and you guys took it a bridge 2 far! (pun intended)

I can hardly add anything to the discussion about building bridges. Or I would have to add my strength theory course from the past, and I don't want to do that to anyone, myself included!

The first part then: recreate a vehicle, and get the one from your neighbors rammed into your stomach halfway through the process. My top 2 looked completely different this time. Someone who reads my columns will already have noticed that I like a beautiful finished piece. So I would have put Martijn and Jos's boat train at number 1.

I just adored it. I would have placed Andreas and Arno at number 2. I love how they manage to take it to the next level with each project, while delivering a nice result. Well done! My honorable mention goes to David and Giovanni. They clearly weren't feeling it, but I thought the idea of ​​turning the "rocket ice cream" into an "ice cream harvesting mobile" was very cool (pun intended). I would have turned the rocket a quarter turn, but that might have been too easy.


Statement of the week

This week's "statement of the week" goes to Lola. When they drove up with the weights to test their bridge, she blurted out "You shouldn't have taken that whole cart". That was beautiful.
Until next week!

PS: #Dreamland and #VTM, could it be possible see the winners of the Dreamland building competition on TV?